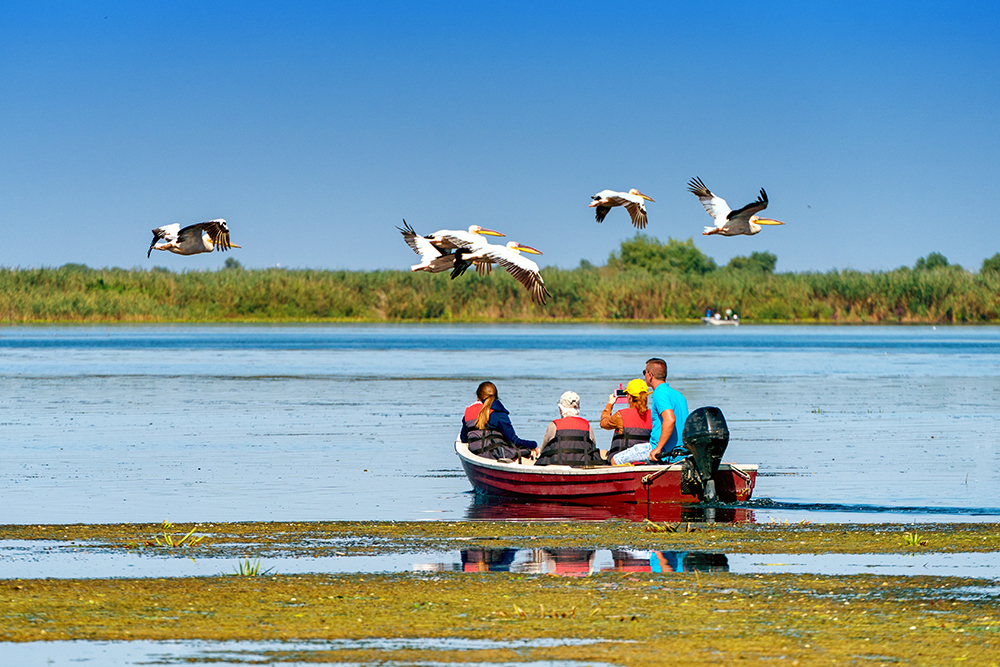 The mighty Danube River flows 1,788 miles from its springs in Germany’s Black Forest to the Black Sea. Just before reaching the sea it forms the second largest and best preserved of Europe’s deltas: 2,200 square miles of rivers, canals, marshes, tree-fringed lakes and reed islands. The Danube Delta is a wildlife enthusiast’s (especially a bird watcher’s) paradise.

Travelers can spend three or more days exploring its passages, teaming with the highest concentration of bird colonies in all of Europe. The maze of canals bordered by thatch, willows and oaks entangled in lianas, offers the perfect breeding ground for countless species of birds, some of them from as far away as China and Africa. Millions of Egyptian white pelicans arrive here every spring to raise their young, while equal numbers of Arctic geese come here to escape the harsh winters of Northern Europe.

Some 300 species of birds make Danube’s Delta their home, including cormorants, white tailed eagles and glossy ibises.  The bird watching season lasts from early spring to late summer. Birds are not the only inhabitants of the Delta. There is also a rich community of fish and animals; from wildcats, foxes and wolves, to even an occasional boar or deer. Altogether, 3,450 animal species can be seen here, as well as 1,700 plant species.

The Delta can be explored as part of a Danube River Cruise, or on day trips and boat excursions from Tulcea which has good hotels, restaurants specializing in fish dishes and the Museum of the Danube Delta.

» The Danube River is the most international river on the planet – its course runs across — or forms a part of the borders of  several countries: Germany, Austria, Slovakia, Hungary, Croatia, Serbia, Romania, Bulgaria, Ukraine, and four capitals: Vienna, Bratislava, Budapest and Belgrade.

» Formed over a period of more than 10,000 years, the Danube Delta continues to grow due to the 67 million tons of alluvia deposited every year by the Danube River.

» The Delta is formed around the three main channels of the Danube, named after their respective ports: Chilia (in the north), Sulina (in the middle), and Sfantu Gheorghe (in the south).

» The Danube Delta Biosphere Reserve has the third largest biodiversity in the world (over 5,500 flora and fauna species), exceeded only by the Great Barrier Reef in Australia and the Galapagos Archipelago in Ecuador.

» The Danube Delta is home to over 60% of the world’s population of pygmy cormorants (phalacrocorax pygmeus), 50% of red-breasted geese (branta ruficollis) and the largest number of white pelicans (pelecanus onocrotalus) and Dalmatian pelicans (pelecanus crispus) in Europe.

» More then half of the Delta Biosphere Reserve is virtually intact.