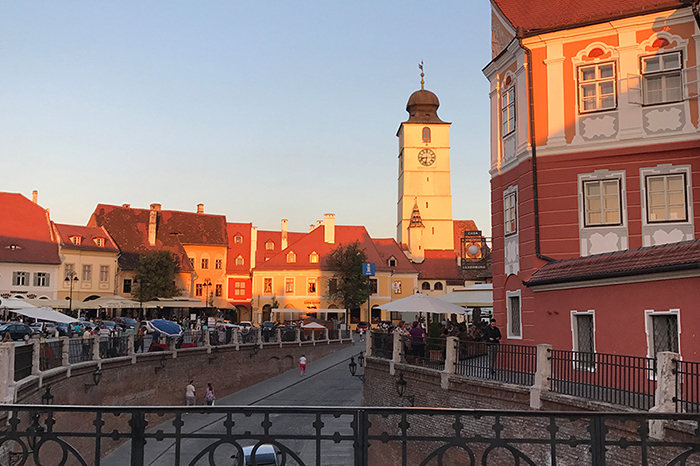 Call it Sibiu, or call it Hermannstadt, its German name, the Transylvanian city  reveals its historical, cultural and architectural beauties to every traveler who steps on its narrow cobbled streets. European Capital of Culture in 2007, the town was built in the 12th century by the German settlers (Transylvanian Saxons).

Sibiu definitely deserves its name of European Capital of Culture, as it has a lot of cultural events going on throughout the year.   The International Theatre Festival, which takes place every summer, has become the largest performance arts festival in the world. There are also the Jazz Festival and the autumn ASTRA Film Festival, which gathers anthropological and documentary films from all over the world.  As a former ASTRA Film Festival volunteer, I would definitely recommend it.

If you wish to discover the city by foot, you have to know Sibiu is split into The Upper Town and the Lower Town. The two sides are connected by the Stairs Passage, a picturesque passage, with twin staircases and archways. Inside the Upper Town three squares await you: the Great Square (with the Bruckental Palace and the Council Tower), the Small  Square (the place where you can sit down on a cozy, arty chair and enjoy a cup of coffee) and  Huet Square, with its architectural wonder: the Evangelic Church.

The Evangelic Church was built in the 14th century and has a magnificent seven levels tower, the tallest tower in Transylvania. I took on the challenge to climb the old wooden staircase and I got to the highest level. The view was breathtaking, with the whole city at my feet and the mountain landscape on the horizon. I admit climbing up that narrow staircase gave me shivers, but it was definitely worth it. But that’s not the only reason to step inside the Evangelic Church. It has an impressive collection of gothic items, from pottery to adorned booklets. If you’re really into the Gothic period, also visit the Franciscan Church. Although the interior has many baroque influences, the exterior remains true to its original style. And for those who have seen and fallen in love with Saint Sofia Cathedral in Istanbul, Sibiu has a smaller copy, but as impressive as the original: The Holy Trinity Metropolitan Cathedral.

Since you are in Sibiu, you must visit The Bruckental Museum (the oldest in Romania, 1817) which actually consists of five museums, under the same administration. So you can choose between: Bruckental Palace, The Altemberger House Museum of History, Museum of Natural History, Museum of Pharmacy and The “August von Spiess” Museum of Hunting.  I’d suggest The Bruckental Palace (the Great Square) and The Pharmacy Museum, considering the fact that Sibiu was home to the first pharmacy on the Romanian territory (1494).

Alternatively, if you prefer an open air museum, head towards ASTRA Museum, which offers you insight on the traditional houses and buildings in Transylvania; plus an impressive collection of windmills.  The ASTRA Museum is outside the city, but its reachable by public transportation.

And you definitely mustn’t leave Sibiu without seeing its towers. Three 15th century towers have resisted the trials of time: Harquebusiers’ Tower, Carpenters’ Tower and Potters’ Tower. And let’s not forget the 16th century tower: the Great Tower.

All in all, Sibiu is a Transylvanian jewel, worth visiting for its cultural and historical richness.