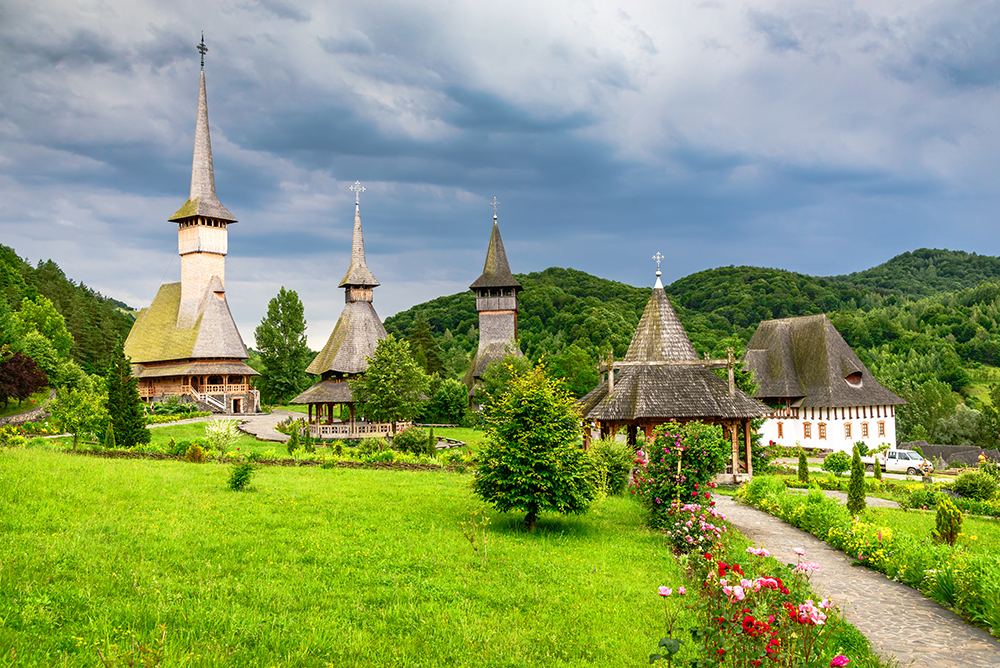 The golden glow of the sun against the soft pastel houses; residents going about their business, tending the chickens, their vegetable gardens or sitting on the front porch can make an unforgettable scene. In villages and in the countryside, on lands dominated by ancestral castles, old fortresses and peaceful monasteries, life moves a little slower and follows ancient rhythms of tradition and culture.

It’s not unusual to see a farmer bringing his fruits to the marketplace in a horse drawn wagon or to encounter a village festival where the locals perform ancient rites of planting and harvest dressed in colorful traditional costumes. Cold, pure well water beckons the thirsty traveler from the roadside. Men kiss women’s hands in a courtly greeting unchanged for hundreds of years. Lush vineyards, first planted by Dacians – ancient inhabitants of Romania, yield fine wines.

In Transylvania, you will find villages clustered around ancient Saxon citadels, edifices that often enclose exquisite churches built by German settlers from the 12th to the 16th centuries.

A lovely half-hour drive south of the medieval city of Sibiu takes you into the pastoral landscapes of Marginimea Sibiului, one of Transylvania’s best-preserved ethnographic areas. Located at the foothills of the Cindrel Mountains, Marginimea Sibiului (meaning Boundaries of Sibiu) encompasses a string of 18 traditional Romanian villages *, rich in architecture, history and heritage. Age-old traditions, customs and celebrations, as well as the traditional occupation of sheepherding, have been carefully passed down from generation to generation in the villages of this area. Rasinari, dating to 1204, is the oldest, followed by Talmaciu (1318), Orlat (1322) and Saliste (1354). Saliste claims the oldest church, housing beautiful interior frescoes (1674), while Poiana Sibiului’s wooden church was built in 1771. Painting on glass has been a tradition for 200 years in these villages. The Museum of Painted Glass Icons in Sibiel exhibits the largest collection of painted glass icons in Europe – more than 700, as well as furniture and ceramics.

Villages in the Apuseni Mountains are even more remote and lost in time.
If you wish to discover local life and preserved traditions, one of the main points of interest is the Aries Valley, where the beautiful villages of Albac, Garda, and Arieseni are located.
Skilled artisans, the Motzi people, carve musical instruments, hope chests and houses from the local wood, the spruce. In Patrahaitesti, a little mountain village, you may hear the famous Bucium (“Alps horns”), which are used for generations in the Apuseni Mountains.